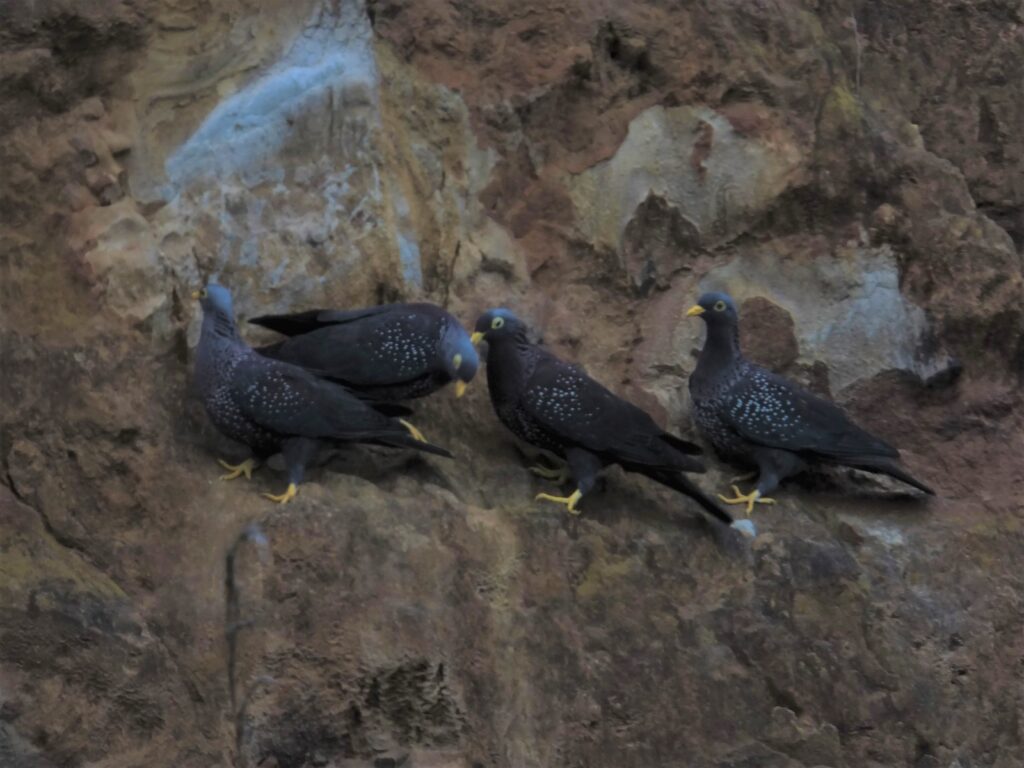 Geophagia, the practice of eating soil or clay is well documented in humans and dates back millennia. One belief is that clay is beneficial for stomach issues such as indigestion. Geophagia has also been recorded in more than 200 species of animals including birds and primates. The reasons for animals eating earth may be that it provides minerals that are otherwise lacking in their diets and soil / clay may assist with detoxification.
On Mountainlands some of the pink coloured sandstone deposits are favoured as animal licks. These natural dispensaries are visible as cavities on the hillsides and in the grasslands where the teeth marks of critters can be seen where they gnawed on the earth. Its use is the obvious reason why some ungulate droppings resemble scoops of rock hard strawberry ice cream. 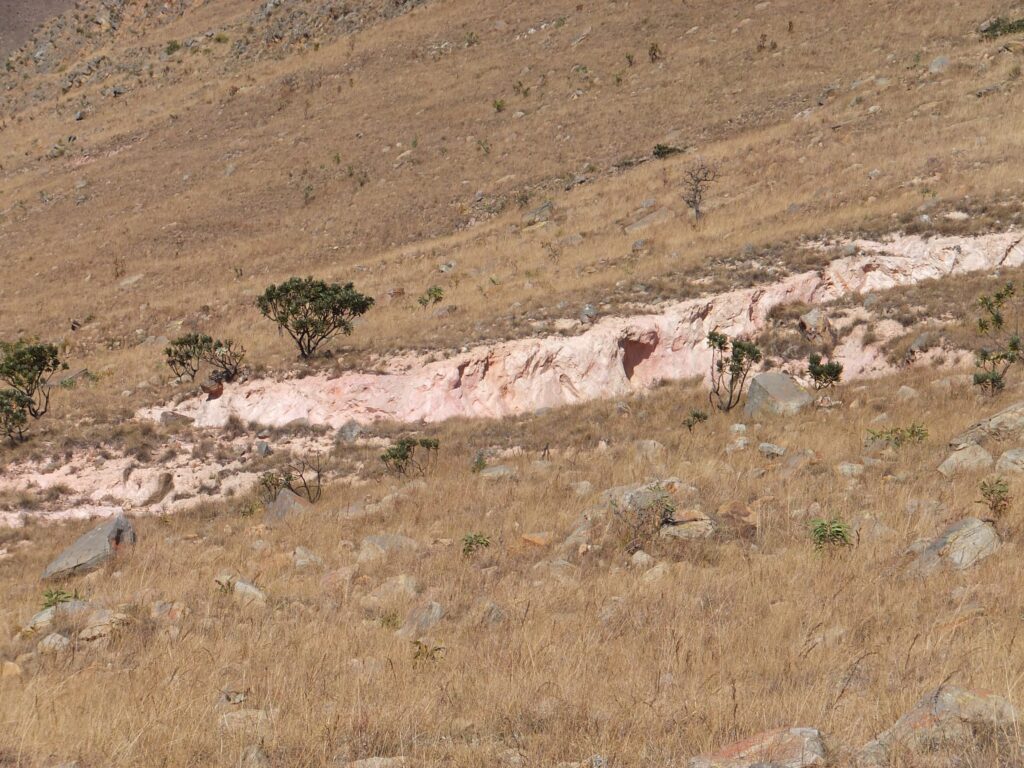 The pinkish colour of a well used animal lick on Mountainlands

The reason why birds practice geophagia is much debated and the explanations put forward seem to differ from species to species and region to region.
In a study done by Colleen Downs from the School of Biological and Conservation Sciences, University of Kwazulu-Natal, she researched the reasons why African Olive Pigeons (Columa aquatrix) may eat earth. These birds are frugivorous, which means they feed on forest fruits. She recorded that the birds she studied in Kwazulu-Natal fed on both grit and clay and that it serves several functions. The grit mechanically grinds food and the birds may obtain minerals, trace elements and salts from the clay. The clay also appears to have a buffering capacity and may also play a role “in combatting the effects of secondary compounds found in the fruit eaten.” * 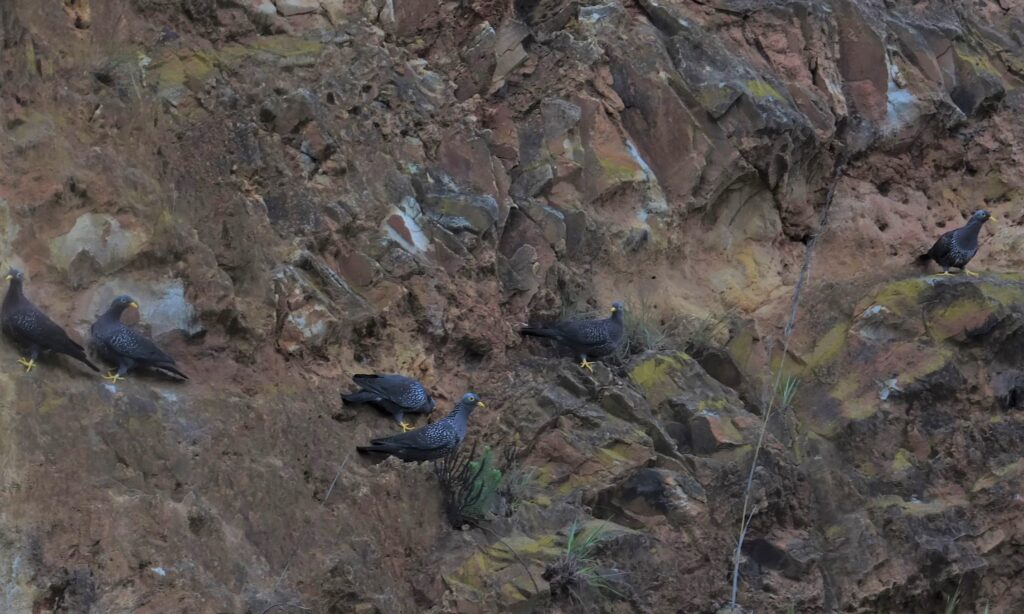 Pigeons at a lick along the Geotrail.

In our neck of the woods African Olive Pigeons can be seen practicing geophagia on weathered rocks along the Barberton Makhonjwa Geotrail. Prof Christoph Heubeck, from the Institute of Geoscience at the Friedrich-Schiller-University in Jena, Germany, who is familiar with the fascinating geology where the pigeons are often seen laid it out as follows: “The rocks the pigeons are picking at are interbedded sandstones and siltstones of the Moodies Group that were originally laid down in a coastal plain with sandy rivers emptying in tidal flats. At the same time, there was intensive volcanism, and we can observe the tidal channels of that time eroding into river banks consisting of interlayered sand and consolidated volcanic ash. We see that chunks of volcanic ash (tuff) are commonly reworked in the sandy channels. All this is well exposed in the white outcrops at the “White Tidal Sandstones” parking lot to which these beds are more or less equivalent.”

“Volcanic ash consists of very-fine grained microscopic glassy magma shards which weather rapidly because they have such a huge surface, quickly take up water and have a composition that is not stable in the presence of soil acids or slightly acidic rain. The volcanic grains therefore decompose to clay, rich in K, Na, Mg, Ca (all of which form light-colored minerals) but also some Fe and Mg (forming orange, red or brown minerals). These volcanically derived clays (montmorillonite, illite) can absorb and desorb water and cations; they shrink and swell. At the roadside pictured, water from the steep slope above drains through the grassy soil and seeps out in the upper part of the outcrop so that the clay-rich weathered rocks there are almost always moist and soft; easy pickings for the birds.”
“I suspect the clays and their cations balance the fruit-rich diet of the birds, by neutralizing the acids. They may also provide a source of Mg, Fe and P. It’s simply “good for the digestion”, and probably not only for birds,” he added. (Thanks Christoph, I bet the pigeons didn’t know all that. – Ed).
So the next time you travel along the Geotrail you will know why the pigeons appear plastered on the rocks.