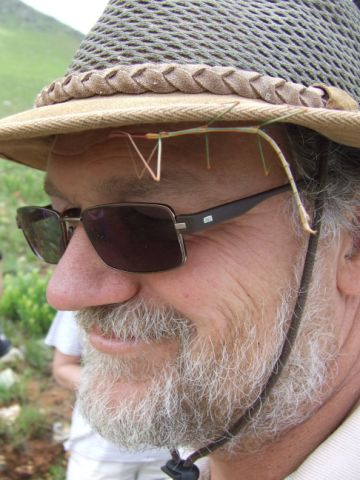 Prof Kevin Balkwill from Wits University with a stick insect keeping him company.

Scientists, students, school children, volunteers and lay experts have once again converged on the reserve for the early summer bioblitz.

Scientists from Wits University, the South African Biodiversity Institute (SANBI), the South African Wildlife College (SAWC), Mpumalanga Tourism and Parks Agency (MTPA), Buffelskloof Herbarium, members of the Lepidopterist Society and citizen scientists gave freely of their time and expertise to record the insect and plant species.
The high lying grasslands, valleys, a wetland and perennial stream were surveyed. A dragonfly known as the Boulder Hooktail, Paragomphus cognatus was photographed there for the first time. According to Christopher Willis from SANBI it is a fairly common species that often perches on rocks in rivers. Christopher also photographed a longhorned beetle, Phytoecia (Blepisanis) bohemani Pascoe, 1858 which is endemic to South Africa. 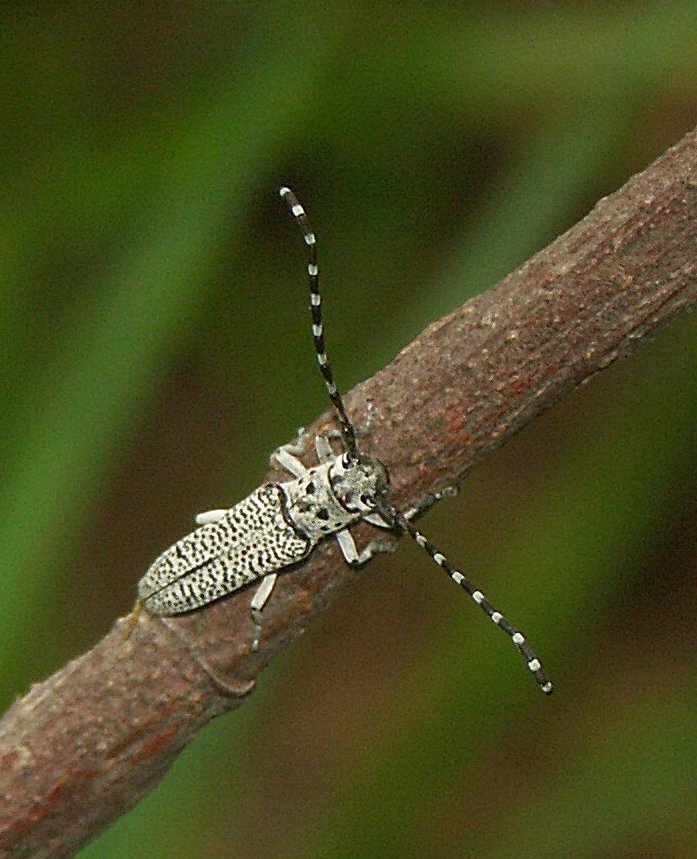 It was the first bioblitz where SAWC Environmental Monitors collected dung beetles. Eight dung beetle traps were set up in the veld. These consisted of a bucket placed in a hole in the ground, a funnel that guides the beetles into the bucket, and a grid which is placed over the hole on which the dung is placed to lure the beetles. Four traps were set up in open grassland and four in a dense wooded area on the side of a mountain. The traps were inspected every morning at sunrise and every evening at sunset and specimens were collected for identification. The traps were then re-baited to lure beetles again.
Some of the species found were Kheper nigroaeneus, Anacholcos convexus, Neosisyphus infuscatus and Proagoderus rangifer and another few that the monitors took back to SAWC to identify under microscopes. “According to Dr Alan Gardiner different dung beetles are attracted to and utilize different dung types and this would have obvious implications for dungbeetle diversity in a specific area,” said Marilize van der Walt, Research and University Program Officer of the SAWC.
Together with Dr. Alan Gardner and Barberton butterfly expert, Herbert Otto, the SAWC team also collected butterflies during the day to assist in recording species for the Mountainlands species list. Dr. Gardiner found all three rare Barberton butterflies, confirming their continued presence on Mountainlands Nature Reserve. These specials are Jeffry’s Blue (Lepidochrysops jeffryi), Swanepoel’s Blue (L. swanepoeli) and Barbara’s Copper (Aloeides barbarae).
School children from Barberton and Nelspruit had the opportunity to observe the scientists at work and participated in the spotting and catching of insects. This was a fun learning experience for the budding scientists of tomorrow. 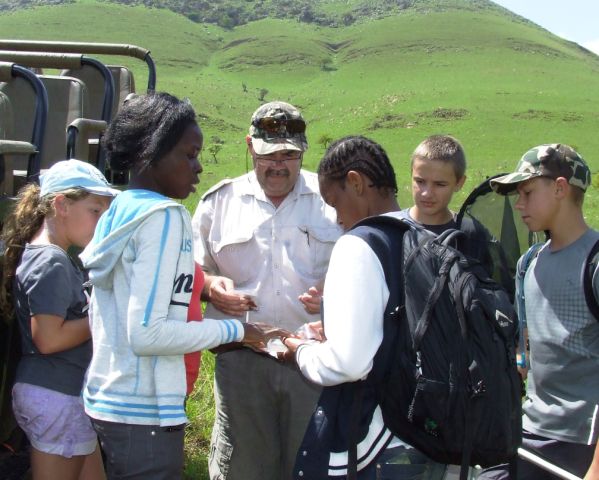 Some of the special plants collected, to be included in reference herbariums of Wits are Thorncroftia lotterii and Eulophia chlorantha which are known from only a few locations. In SANBI’s Redlist of South African plants both these species are categorized as vulnerable meaning they face a high risk of extinction due to the transformation of their habitat brought about by, amongst others, illegal mining and competition from alien invasive species.
It will take time to identify all the insect and plant species that have been collected and the results will be consolidated in due course. Due to the rugged terrain and inaccessibility of many areas it is likely that new species may yet be discovered.
The information gathered during this bioblitz will be fed into the Mpumalanga Tourism and Parks Agency database for the reserve which will again assist them with executing their conservation and research mandate.
The bioblitz was made possible through the generous support from Crossings Superspar in Nelspruit and the voluntary contribution of the scientists. 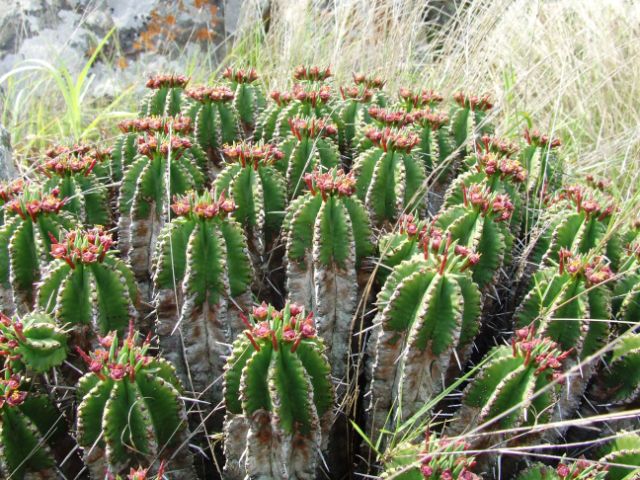 Although common, the pincushion cactus, Euphorbia pulvinata, put up a nice display with its tiny flowers.