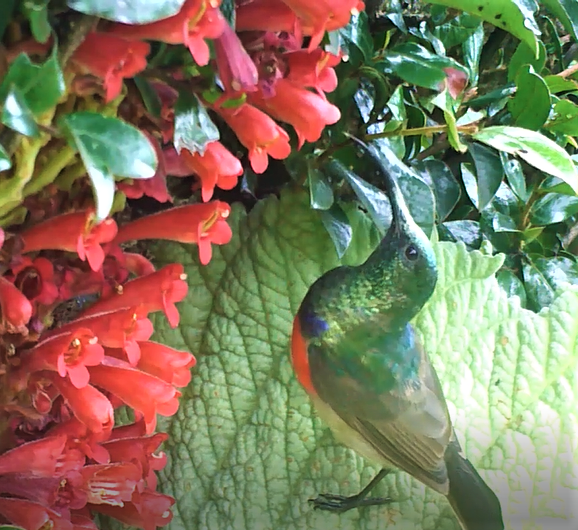 The rocky grasslands of southern Mpumalanga and Eswatini are the stage of incredible bird pollination behaviour. It is here where Streptocarpus dunnii grows in full sun or under rocks and in crevices. With its array of brightly coloured red trumpet shaped flowers it proofs irresistible for sunbirds who need all their aerobatics skills to get their nectar fix from these flowers.

It was known that Malachite sunbirds  pollinate these plants, but it has now been discovered that Double-collared sunbirds are also in on the act. And this is most likely the first time this has been filmed.

This rarely seen footage shared below is all thanks to the ground breaking research done by Steve Johnson and his team from the School of Life Sciences, University of Kwazulu-Natal. This specific footage forms part of the pollination studies of Cally Jansen that we reported about in https://www.mountainlands.co.za/surprising-pollinators/. Short range trail cameras have been placed focused on plants in Dullstroom, Mountainlands and Malalotja in Eswatini.

“We have about 200 videos from two Dullstroom sites and each is as much fun as the last, with tens of flowers probed in a feeding bout, beautiful stigma contact and little puffs of pollen being released! Cally has her work cut out going through the footage, but she will put together some highlights in a video that will go to Youtube and will also write a scientific paper based on her research on Streptocarpus dunnii. Steve is cooking up a channel of pollinator videos, and we will share that later too, “ said Ruth Cozien who, together with Steve oversees Cally’s research.

She and Cally recently visited Mountainlands to collect the short range trail cameras. Unfortunately no pollinators were filmed feeding of Streptocarpus dunnii but the team shared their footage of sunbirds in action in Malalotja and Verloren Vallei Nature Reserves.

You will see the magical moment where the plant is so well equipped to reward the sunbird with nectar in exchange of carrying its pollen to another Streptocarpus dunnii, which of course is what the flowers require. Look carefully and you will see the Double-collared sunbird head buds the stigma of the flowers releasing pollen into the air and ending up with pollen on top of its beak and head.

It is these little things in life that we sometimes take for granted. May this footage instill a sense of wonder and remind us that we are part of nature and have to take care of it.