“Tonight we honour those who have given their best in executing the core functions that lie at the heart of the Environmental Management Inspectorate“ said the Department of Environmental Affairs, Deputy Director General, Ishaam Abader as he introduced the Awards of Excellence at a function held on 9 November 2017.

The Award of Excellence in the category Outstanding Support to the Environmental Management Inspectorate was announced with:

“The adjudication panel made this award given the sheer impact of this matter and the guidance that it provides to the Environmental Management Inspectorate.

Due to the sheer persistence of these two officials, in driving litigation which eventually ended up in the Constitutional Court after an eleven year battle, they must be admired. The outcome of this case is now used as a support basis for various other cases handled by the department and other authorities who regulate this space. These cases are of national importance.

Both these nominees have shown strength and resilience in a fight against overwhelming odds and money. They’ve persevered through hard work in dark times when it would have been much easier to give up.  The issues at stake were of such importance to these two nature conservationists that neither threats, money nor any interference could dissuade them from their goal.

It must be mentioned that there were other role-players also involved in this period, which include the Mpumalanga Tourism and Parks Agency (MTPA) top management that also deserves credit. These two officials displayed the true character of Environmental Management Inspectors (EMI’s) which is captured in the theme for this year: “People, Purpose Passion, the Pathway to EMI success”.

So the recipients of the award are Louis Loock and Nico Oosthuizen.” 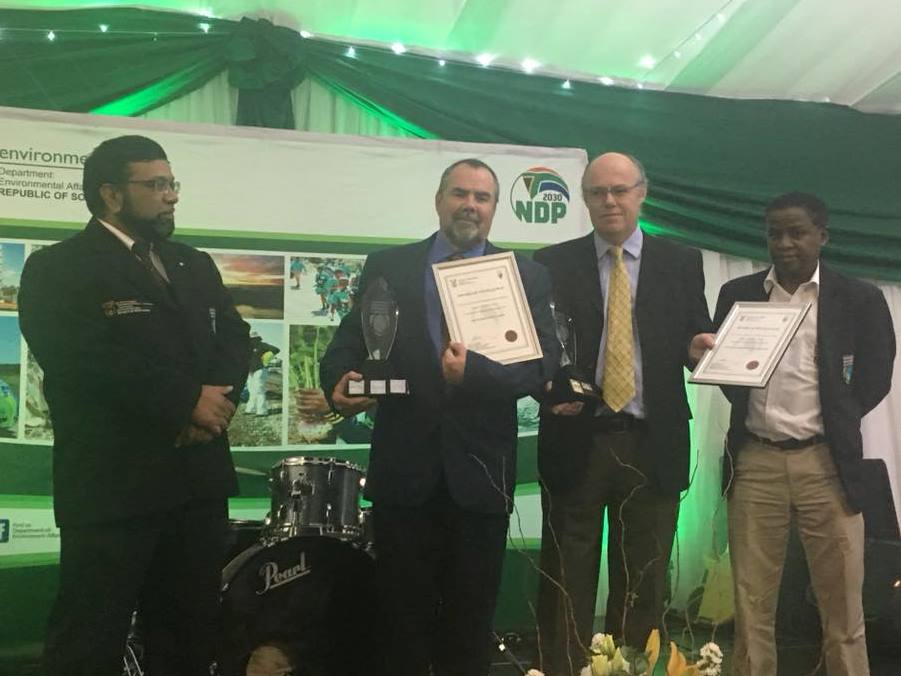 Louis Loock of Mpumalanga Tourism and Parks Agency and Nico Oosthuizen of Mountainlands Estate Owners Association receiving the Award of Excellence for Outstanding Support to the Environmental Management Inspectorate of DEA.

Louis and Nico said they were humbled by the recognition and dedicated the award to their colleagues and all those who contributed to the case, going back all the way to 1985 and the officials at the then Transvaal Provincial Administration: Division Nature Conservation through to the present day Mpumalanga Tourism and Parks Agency and their legal team

Read more about the case for which they were awarded…